It’s been a while and I wanted to update you all on how things are going with my hair. Things are good so far. My hair feels healthy, and it’s very shinny.  I’m still trying not to be such a product junky. It’s really heard for me because I always want to try what’s new even if what I’m using is working fine. I’ve been trying to buy less products for my hair because, well I’m broke for one. I just got married and finances are still very shaky.  Another reason is I want more of a consistent regiment. I had some trouble in the past and I think it was because I was introducing to many things to my hair at once.
So far I’ve been using oils in my hair that are good for growth household products like Greek yogurt, and honey, and anything I have left over to start clearing them out. I started using palmers coconut oil again and I can say with out a shadow of a doubt that it’s is causing the dandruff problem. It’s been months since I used it and the itching and dandruff flared right on up again. I want to use it up to get my money’s worth but I might just throw it out cause as I’m writing this I’m stopping to scratch. Not cool!
I also was bad and bought something from the dollar store. I picked up Aunt Jackie’s knot on my watch instant detangler. I like it so far even though I only used it once. It really detangled my hair even after I had it in twist for like 2 weeks or more. Usually it takes forever to get through my hair after leaving twist in a lengthy time period, but I was through my hair in like 30 min or so. I’m impressed I have to admit. One problem though is that I got it at dollar deals and I have know idea what other retailer carry’s it. It smells good too.
I also got some edge pomade by ice cause the one I made from scratch with castor oil and hair gel was a fail. If I wasn’t so lazy I would make some flack seed gel. Flack seeds are also pretty pricy. I was looking into it for smoothie purposes also and I can’t spend that much on such a small bag. Maybe I will come across it in bulk.
Last but not least I may have stumbled onto something good or bad I’m not sure yet so don’t try it till I figure it out. Seriously I really don’t want to hear any you gave bad advice and my hair fell out stories. Ok so before I wash my hair lately I’ve been spraying it with apple cider vinegar mixed with water. It was really helping get that product build up off my scalp when I left styles in a long time. It also helped eliminate that pesky dandruff situation.
One day I added 4 drops of peppermint oil to cutout the smell cause that stuff stinks. It started tingling at fist then the tingle turned into a stinging and my shower was hot and the peppermint started chocking me. I washed it out right away of course cause I thought I had made a bad mistake. Afterward my curls seemed a little looser then normal, but my hair was more manageable. Before I used the mixture I also deep conditioned with coconut milk and honey so that also could have been why my hair changed.
Later on I read something about lemon juice I forgot what it was but I got it in my head that it would be good for my hair. So I added it to the ACV water peppermint oil mixture and it tingled but did not sting or choke me. Afterwards my hair was more manageable but my curl was still the same maybe slightly looser but not that noticeable. My hair was also browner on the parts that was dyed back during my wedding. I know lemon juice can dye your hair, and so can honey so maybe that’s why.
Here’s the awesome part. My denman brush is always dirty and I can’t seem to get it or any of my combs clean. It melted that dirt right off. It even got it out the hard to reach crevices on my combs. I’m not sure I will keep using this mixture when I wash my hair but I will use it to clean my styling tools.
Some of the things I’ve been using in my hair lately is apricot oil, jojoba oil, coconut oil, castor oil, olive oil, Shea butter mixture. I also spray my hair with Aloe Vera juice whenever it feels dry.
If u want to keep up with what my hair is doing in more picture forms check out my Facebook or Instagram page of the same name. I usually post a pic every time I change my hair or try some new stuff on it. I also have 2 awesome Pinterest boards dedicated to natural hair and products.  Look me up you won’t regret it. 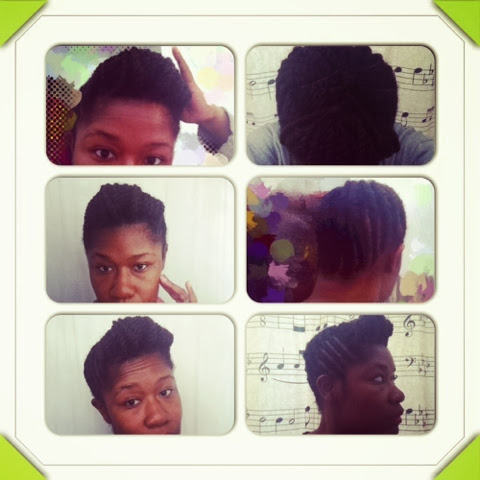